It’s fall in Maine – a gorgeous season. Foliage was late this year, and the season short, but there are still some great colors around. Seen on a dog walk the other day – view of a blueberry field across the lake:

I was away last week for work in lovely Rochester, NY. It’s an interesting city. Neat architecture, and of course its claim to fame is being home to Kodak. We had a reception at the Eastman House – for some reason, I was totally keyed into the textures in the house (perhaps because the decor was a bit ornate for my taste – however, it was superb quality). Here are a few textures that caught my eye – a lot of white and gray; go figure. 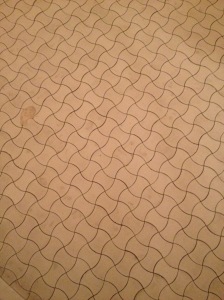 We think this is a good order of operations. Now that we have running water, all attention turned to keeping this little shack warm. Because our house hasn’t sold yet, we were a bit short on the liquid assets, but found a fantastic energy loan program through Efficiency Maine that has provided the funds we needed to get the final round of spray foam insulation done (in the basement) and to purchase a super-efficient, quite lovely Italian pellet stove (the Piazzetta Monia). Just in the nick of time, too! It has almost dipped to freezing a few of the past nights.

Of course, it required a custom install – not much these days is made for log homes. We used some salvaged flooring to create a scribed frame for the wall thimble, and I think it came out nicely.

Yeah, cut out that circle.

The longest part of the process: creating a hole in the logs. Yes, we also used power tools.

Stove pipe – this brand has fantastic seals that make it easy to assemble. Really nice quality.

That says, “65F…Energy saving on”, which translates to, “No, I won’t be turning on for a while”. Good for the wallet, not for the charm.

With the spray foam installed yesterday, however, I’m unable to enjoy the stove today – we can’t get the house to cool off enough to fire the stove (grin). It has been working great when it has burned so far, though.

Yesterday afternoon, we pulled the well pump – again! – to add a second check valve. We were getting air in the plumbing and getting hissed and spit at in the shower (and sinks) was a bit unpleasant. Seems to be fixed with that valve, now. The good news is, we have gotten very good at working on our well – the whole process barely took an hour. New career? Kidding, kidding.

I got one decent photo of the supermoon/blood moon/eclipse, which happened right in front of our cabin. 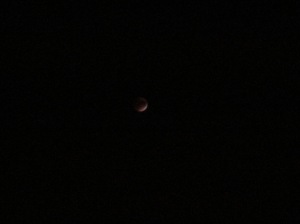 Then we got a total gully-washer later in the week, as previously mentioned.

Nearby railroad tracks – suspended and washed out now in many places. A huge rain!

We can’t complain much. Nearby (and even in town), trees were down, roads closed due to flooding, etc. We just lost a little gravel from our driveway. Perfectly timed, given that K had begun – and gotten a fair bit of work done on – our new drainage system. We pretty much finished it up this weekend, doing some fancy stuff like adding a step out back and refreshing the gardens with some stones and plant material from around the lot.

Approval by the inspector.

‘Found’ stones and ferns from around the property.

Tidied up the old garden that leads down the path, too.

Even though this was all about infrastructure – drainage in this constricted, rock-bound corner – it was nice to work together to make it a bit prettier as well. And the bonus: except for landscape fabric and perf pipe, this was a freebie. We re-used rocks from around, and harvested ferns from the woods. And – our gravel was free as well – the stone yard accidentally delivered gravel on the day they were supposed to send loam, so we got a two fer. No complaints – despite twice as many bucket loads to haul (K being the superman and taking two buckets each trip up the stairs!) – we planned to get gravel later anyways. It was fortuitous timing, kicking us into action just before the storm.

All attention is now on central heat. Our stove (and parts) are ordered and should be on a boat? plane? from Italy this week. A custom hearth is made, and this cold dog will warm up soon…

We had a hell of a storm! Just in time to test out the new drainage system. Boom! No ponding of water. Meanwhile, roads all over our region were flooded and closed. Worth hauling all that gravel? Ayuh.